Ex-Spice Girl Mel C has said bad weather did not put her off taking part in the Great North Run.

The singer, whose real name is Melanie Chisholm, said: "Being a Northern lass I'm used to these conditions."

Almost 56,000 people took to the streets of Tyneside to take part in the 33rd Great North Run which started in Newcastle.

World and Olympic champion Mo Farah narrowly missed out on becoming the first UK runner in 25 years to win the elite men's race in a thrilling finish. 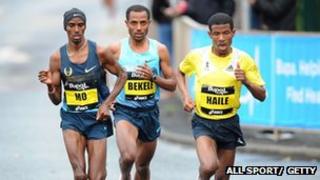