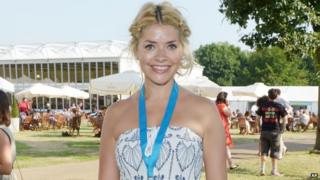 Holly Willoughby is to step down from co-hosting talent show The Voice after two years, the BBC has announced.

The mother of two said she wanted to find the right balance between work and family life.

Holly will be replaced by Big Brother presenter Emma Willis.

Meanwhile, Willoughby's co-host, Reggie Yates, also tweeted he would not be back for the BBC show's third series. His replacement will be announced soon.

In a statement, Willoughby said: "I've had two wonderful years on the show, and I feel very privileged to have been a part of it."

She went on: "Finding the right balance between my work and family life is my priority and this has contributed to my decision. I look forward to watching the next series from my sofa, and I wish the whole team the best of luck."

The second series of The Voice suffered falling ratings, despite lots of changes, designed to make the show more attractive.

However the final, in which Andrea Begley won, beat the first series, with 7.95 million tuning in.