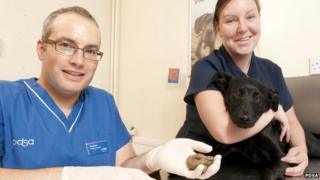 A toy-scoffing pup had to have a life-saving operation after swallowing a plastic poo!

Boo swallowed the joke toy after it got mixed in with her dog biscuits.

She was rushed to a pet hospital in Dundee where it was removed before causing any major damage.

PDSA veterinary surgeon Stephan Hunt said: "Dogs use their mouth to explore objects as well as to eat. Sometimes the two functions get confused."

The doctors were worried that without the operation the toy might have moved into Boo's intestines, which could have been very dangerous.

Stephan said you should always call the vet if you see a dog eating something it should not have - especially if it makes it poorly.

Boo's owner Shelly said: "We can all laugh about it now but at the time everyone was very worried about her."

"Needless to say we won't be having any joke dog poo in our house again!"