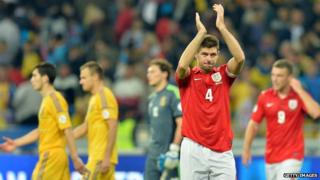 England kept their hopes of qualifying for the World Cup alive after holding Ukraine to a nil-nil draw last night.

It meant Roy Hodgson's side stay top of Group H and will qualify for Brazil if they win their final two Wembley qualifiers against Montenegro and Poland.

The draw moved England one point clear of Montenegro at the top with two games remaining.

England captain Steven Gerard said: "Of course we would have liked to win."

But he added: "Ever since I have been a young kid the message has been the same: if you can't win a game then make sure you don't lose it.

"For the last two games we will have home advantage, it will be a packed Wembley, a great atmosphere and we will have a lot more players to pick from, so I am confident that we can go and get the job done."

Manager Roy Hodgson defended England's performance saying he was happy with how his side performed.

"Our attacking options were very limited because we were without Rooney, Welbeck and Sturridge.

"We also lost a top midfield player in Alex Oxlade-Chamberlain [because of a knee injury] and I thought those players who took their places did a remarkable job."

England is the only remaining country of the home nations with a chance of qualifying.

Only the top team in each group goes through, with play-offs for the runners-up. Wales and Scotland are currently 5th and 6th respectively in their group.