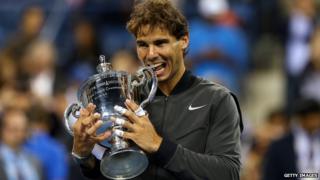 Rafael Nadal beat world number one Novak Djokovic in a thrilling four-set final to win his second US Open title.

One incredible rally lasted for 54 shots - the longest in the New York City tournament - by 20 shots.

Nadal said: "Having this success is amazing, I never expected it. That's life and I'm lucky to have what I'm having."

Over 23,000 spectators watched the match in the Arthur Ashe Stadium.

"All of my team knows how much this match today means to me," added Nadal.

"Playing against Novak is always a very special feeling and nobody brings my game to the limit like he does."

Djokovic, whose loss was a fourth in five US Open finals, admitted: "He was too good, he definitely deserved to win this match and the trophy.

"Obviously, it's disappointing to lose a match like this. Again, it was a huge privilege and an honour to fight for this trophy."