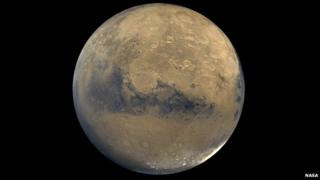 Dutch engineer Bas Lansdorp plans to establish a human base on Mars in 2023.

Before that he needs to scrape together $6billion (£3.8billion) - and find willing volunteers to take the trip.

The risky journey to Mars would take about seven months to complete.

If the crew survive they will have to deal with temperatures of -55C - and there'd be no way back to Earth.

It's possible that the mission could be beamed back to Earth as a reality TV show.

Space agencies including Nasa say the technology to establish a human colony on Mars does not yet exist.

Nasa has suggested it will send astronauts to Mars within 20 years.