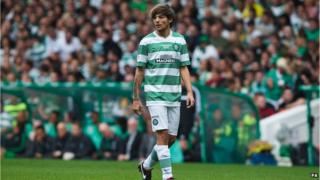 One Direction's Louis Tomlinson played alongside John Terry, Jamie Redknapp and other celebrities at a footy game in Glasgow at the weekend.

The match at Celtic Park, Glasgow, was organised to raise money for the Stiliyan Petrov Cancer Foundation.

Petrov is a former Aston Villa player who retired in May having been diagnosed with leukaemia in 2012.

Louis couldn't play the whole match after a bad tackle from Villa striker Gabriel Agbonlahor knocked him down.

Agbonlahor has since said he plans to apologise for the tackle.

The match was between A Petrov XI and Celtic XI, with A Petrov winning 5-3.

Louis is to make his debut for his home club Doncaster Rovers when he plays for them on 18 September.