Strictly Come Dancing ahead of X Factor in ratings war 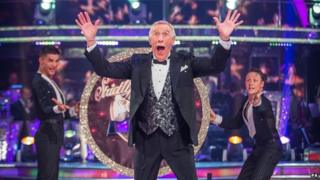 Strictly Come Dancing nudged ahead of ITV rival The X Factor in the annual Saturday night ratings war as the shows clashed for the first time this year.

The BBC One dance show, which began this weekend, drew an average audience of 8.4 million viewers.

The debut put it only narrowly ahead of the 8.3 million, who watched the hour-long edition of The X Factor.

At its peak, X Factor drew 9.5 million, just ahead of 9.4 million for Strictly.

However, the ITV talent show had a big slump in its audience compared to the launch show last week, which saw around 9.2 million tune in to see the return of mentor Sharon Osbourne to the judging panel.

Strictly's ratings marked an increase of 400,000 on the first show of last year.

The two shows only overlapped for 10 minutes!

We asked you who you thought should win.