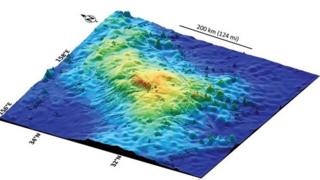 Scientists say that they have discovered the largest volcano in the world, called a dead colossus, deep beneath the Pacific waves.

A team writing in the journal Nature Geoscience says the 310,000 sq km called Tamu Massif is the size of Mars' vast Olympus Mons volcano - the largest in the Solar System.

The volcano beats Mauna Loa in Hawaii, thought to be the tallest.

The massif lies around 2km below the surface of the sea.

It is located on an underwater plateau known as the Shatsky Rise, about 1,600km east of Japan.

The volcano was formed about 145 million years ago when massive lava flows erupted from the centre of the volcano to form a broad, shield-like feature.

The researchers doubt the volcano's peak was ever above sea level during its lifetime and say it is unlikely to erupt again.

"We don't have the data to see inside them and know their structure, but it would not surprise me to find out that there are more like Tamu out there," said Dr Sager.