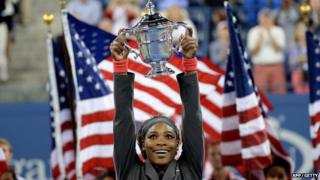 World number one Serena Williams won her fifth US Open title in a thrilling final against Victoria Azarenka.

The American overcame a determined opponent and a testing wind to win 7-5 6-7 (6-8) 6-1 and repeat last year's final victory against the Belarusian.

Williams has now won 17 Grand Slam singles titles, moving her to within one of Martina Navratilova and Chris Evert, and seven short of Margaret Court's record total of 24.

But after letting a double-break lead slip in the second set, and twice failing to serve out the match, Williams worked hard as in any of her 16 previous major wins.

"Vika's such a great opponent, such a great fighter and that's why she's been able to win multiple Grand Slams," Williams said of Azarenka after their contest.

"That's why it was never over until match point.''