Dutch police set to use sniffer rats to fight crime! 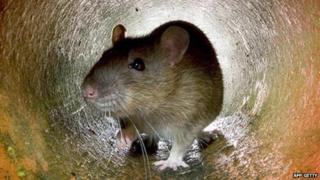 Police in the Netherlands are to use rats to help them solve crimes by sniffing out gunshot residues.

Police will be able to use the rats to see if a gun has been fired.

The team of five brown rats are named after famous detectives - including Agatha Christie's Poirot and the American private investigator Magnum.

Rats can take only ten days to train and dogs can take months or even years.

She says the little creatures could also be trained to detect other things like money or blood.