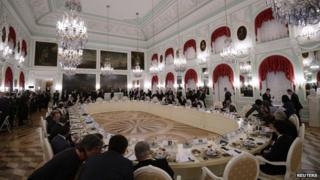 World leaders remain deeply divided over launching a military strike on Syria, on the final day of their G20 summit in Russia.

In a news conference on the final day of the G20 summit, Russian President Vladimir Putin said that America and Russia still don't agree over possible military action in Syria.

The US and France are the only nations at the summit to commit to using force in Syria. China and Russia have refused to agree to America's plan of military intervention.

Yesterday UK Prime Minister David Cameron told the BBC that the UK has fresh evidence of the use of chemical weapons in Syria.

He said today the UK would lead calls for more action on aid for refugees and push for fresh peace talks.

Guide: What is the G20 Summit?