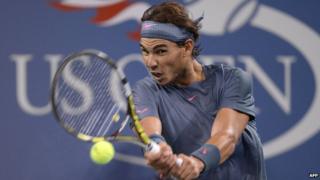 Nadal, 27, goes on to face Richard Gasquet in the semi-finals.

Rafa returned from a serious knee injury in February and has looked particularly strong on hard courts.

He said: "I think I played great the first set - it's my first set so far this year at 100% [meaning he won all the games in the set].

"So in general it was my best match of the tournament, so that's great news."

Meanwhile Defending champion Andy Murray will face a player in the form of his life when he takes on Stanislas Wawrinka in the quarter-finals on Thursday.

The ninth seed from Switzerland knocked out fifth seed Tomas Berdych in the fourth round and afterwards said: "I think I'm playing my best tennis ever."