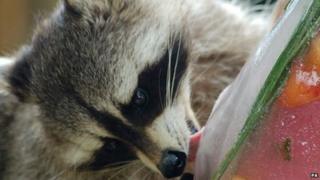 Europe's towns and cities are particularly vulnerable to the threat posed by species from other continents and environments, say experts.

Examples include how raccoons, a North American native mammal, are spreading through the German capital, Berlin.

It's thought towns and cities are at higher risk from invasive alien species (IAS) because of more transport links.

IAS are non-native plants or animals that have no natural predators, spread rapidly and overwhelm native species.

"The problem is that invasive species take over resources and space from the indigenous species", explained conservationist Chantal van Ham.

"Urban areas are quite vulnerable to these species. Often they are introduced, for example, through the trade in plants but also through accidental arrivals in ports and airports."

Next week, the European Commission is expected to outline its plans to tackle the continent's invasive species.