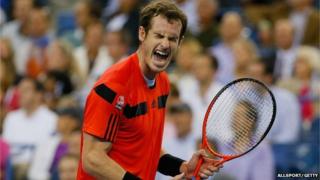 Defending champion Andy Murray has beaten Uzbekistan's Denis Istomin in four sets to reach the quarter-finals of the US Open.

He now faces a match against Stanislas Wawrinka on Thursday.

However, it was hard going over three hours and seven minutes after he let a strong position slip in the first set.

It was 11.44pm local time by the time he punched away the winning volley.