Influential US senate backs use of force in Syria 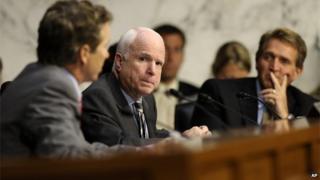 The influential US senate has approved the use of military force in Syria, in response to reports of a chemical weapons attack there.

The group of politicians approved a plan that allows the US to use military force in Syria for 60 days, as long as it doesn't involve sending US troops in on the ground.

Russian President Vladimir Putin has warned the US and its allies against taking action without UN approval, saying it would be "an aggression".

What is the US senate?

In a statement at the White House on Saturday, President Obama said he felt it was important to have a debate about intervention in Syria.

"I've long believed that our power is rooted not just in our military might, but in our example as a government of the people, by the people, and for the people.

"And that's why... I will seek authorisation for the use of force from the American people's representatives in Congress," he said.

Last week we asked BBC Security Correspondent Frank Gardner to answer Newsround viewers' questions about Syria - what's going on and what may happen in the future.