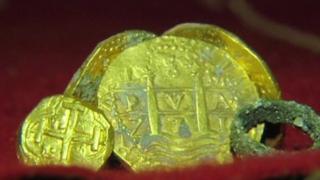 Rich Schmitt and his family found Spanish gold chains and coins off the Florida coast, after years of search.

It's thought the treasure was from the wreckage of a convoy of ships that sunk in 1715 after being hit by a hurricane.

By law, the state of Florida will take some of the gold for display in a museum.

The rest will be divided between the Schmitt family and the company that owns the wreckage.

Schmitt said there was "excitement, followed by a lot of crying" after the discovery.