One Direction: This is Us tops US and UK Box Office charts 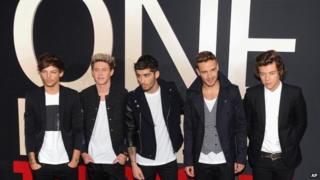 One Direction's 3D movie This Is Us has topped both the UK and US box office charts after its opening weekend.

The film follows Harry, Niall, Zayn, Liam and Louis behind the scenes on their mega world tour.

Despite the film's early success, it's not yet matched the performance of some its recent rivals.

Hannah Montana/Miley Cyrus: Best Of Both Worlds still holds the record for 3D music documentaries, taking a whopping $31.1m on its opening weekend in 2008.

We reckon the 1D boys will still be pretty happy though!