Is your school too overcrowded? 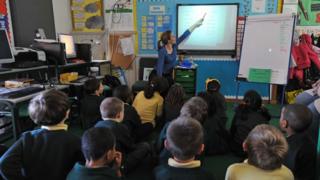 A rise in the UK's population means many primary schools in England could become overcrowded, with not enough classroom space, says the Local Government Association.

It's thought that in a few years' time there won't be enough class space in nearly half of school districts in England, to cope with the number of kids needing education.

The overcrowding is being caused by more babies being born in 2011-12 than any year since 1972.

This means by 2015 when the kids go to primary school, there will be more kids in school than places in the classrooms, in about half of the school districts in England.

But the government says it has more than doubled the amount of money available for new school places, and has opened 93 more free schools.

We asked whether your school is already showing signs of being overcrowded. Do you have lessons in temporary buildings? Or do you sometimes have to have classes in the gym? Do you have to share facilities with other schools?

This chat has now closed but you can see a selection of your comments below.

My classroom isn't cramped because we have a fixed number of children in every class, 30 children or under.

My classroom has two year groups in it and I used to be in a class with three.

I think my school is getting crowded because each class has 30 children in it and last year we had to take an extra class. In other schools classes only have 15 children in them.

In the last few months all of our music lessons have been taking place in a temporary building - though it looks like it might be permanent!

Our classrooms vary in sizes some are bigger the others. I think that all children should have a classroom that they don't feel cramped in.

My classroom last year had 17 people in so it wasn't too bad, but before at my other school the were 32 people in my class and that was really cramped!

Our school was only meant to be for 500 people but now there are 1,000! All the corridors are cramped and they have to take on more new teachers every year.