Tiny Gardiner's frog can hear with its mouth 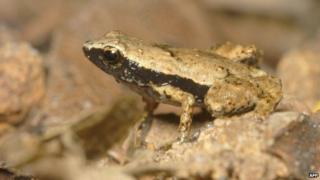 Scientists think they've discovered a tiny species of frog that's able to hear with its mouth!

Gardiner's frogs are able to 'talk' to each other even though they don't have a middle ear or eardrum to hear sound.

Researchers found they have special mouths that resonate with the high-pitched sounds made by other frogs, transmitting them to their brains.

Scientists hope that they can study the way these unique frogs hear, to help in the treatment of deaf people.

For a long time it was thought that Gardiner's frogs, that live in the forests of an island in the Seychelles off the east coast of Africa, could not hear anything at all.

But it was observed during the study that the frogs would turn their heads when high-pitched sounds were made - so even without ears, somehow they were hearing the noises.

Sound waves make their mouths vibrate, like the body of a guitar. These vibrations are amplified to their brains, so they do not need fully-developed ears.

Gardiner's frogs are listed as an endangered species, because their habitat is being spoiled by fire, invasive species, and human activity including agriculture and tourism.

One of the scientists who has studied the animals, Dr Justin Gerlach, says: "The possible extinction of these frogs would mean the loss of 65 million years of remarkable evolution: not only are their hearing systems unusual, but they are also among the smallest frogs in the world."