Andy Murray in to third round of US Open 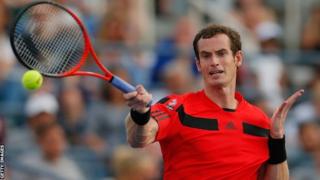 Defending champion Andy Murray is through to the third round of the US Open.

The Scot will now face Germany's Florian Mayer, the world number 47, in the last 32 on Sunday.

"I finished the match well today. I played well when I needed to - that's a good sign," he said.

"I want to keep improving as the tournament goes on. You don't want to play your best right at the beginning, so I hope I can get better."

British number one Murray has had some tough matches on Louis Armstrong Stadium in the past and was tested once again on a boiling hot in New York.

The fans who packed in to the stadium might have been forgiven for thinking a shock was on the cards as Murray struggled to get going in the early stages.

But Murray dropped just one game on his way to taking the second set in just 35 minutes and although he lost the third, he wrapped up the win by taking the fourth set 6-1.