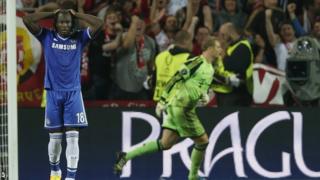 The Super Cup is a game between the winners of last year's Champions League and the Europa Cup.

The win meant Bayern gained revenge for their 2012 Champions League final defeat against the Blues.

An entertaining game finished 2-2 after Javi Martinez took the game to penalties with the last kick of the game.

Fernando Torres had given Chelsea the lead before Franck Ribery equalised.

Super Cup shoot-out as it happened

It was a typically gritty and courageous performance from Jose Mourinho side, who played the final 40 minutes with 10 men.

Chelsea goalkeeper Petr Cech played fantastically, but with seconds remaining he was powerless to prevent Martinez poking home from close range to set up a dramatic penalty shoot-out.