Dan Evans through to third round of US Open 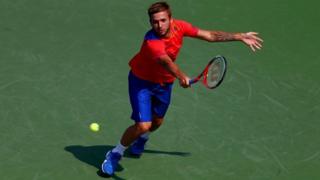 There's a new sporting star to keep an eye on as Britain's Dan Evans wiped out opponent Bernard Tomic in the second round of the US Open.

Evans is the British number three but is ranked 179 internationally, while Australian Tomic is 52 in the world.

The Brit will now go on to face Spain's Tommy Robredo who is ranked 22 in the world.