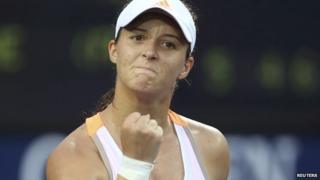 British number one Laura Robson is through to the third round of the US Open after a tight match against France's Caroline Garcia.

Laura won 6-4 7-5 despite playing with an injury to her wrist, which she had to have taped up.

She will next play Li Na of China who is seeded 5th in this tournament.

Laura is only seeded 30th but she managed to beat Li last year in the third round of the US Open so she'll be hoping for a repeat performance!

After the match Laura said: "I thought I played really well and I served really well, and I'm looking forward to the next round."