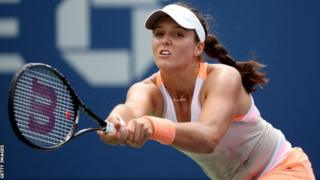 British tennis star Laura Robson won't be playing in the Australian Open this year, the first Grand Slam of 2015.

Laura hasn't played since losing in the first round of last year's Australian Open.

She then had to have surgery on her wrist in April.

But the former British number one won't be away from tennis much longer, as she plans to return to action in February.