Life on Earth may have started on Mars, say scientists 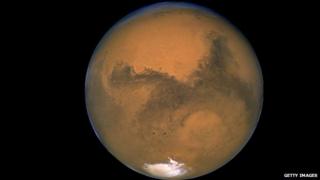 Could we all be Martians?! Because new research suggests life on Earth might have actually begun on Mars.

Scientists in the US have found evidence to show that some compounds found in human DNA might have originally come from Mars.

They think they were transported to Earth by meteorites billions of years ago.

The research also suggests that back then Mars was actually a better place to kick-start life than Earth was.

"The evidence seems to be building that we are actually all Martians; that life started on Mars and came to Earth on a rock," says Professor Steven Benner who explained the research.

"It's lucky that we ended up here, nevertheless - as certainly Earth has been the better of the two planets for sustaining life" he added, "if our hypothetical Martian ancestors had remained on Mars, there may not have been a story to tell."