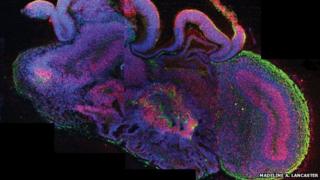 Researchers, based in Austria, started with human stem cells and created cultures that then grew into a 4mm wide 'cerebral organoids' - or mini brains.

The brains, which are the size of a pea, aren't capable of thought and can't be used for transplants, but scientists say they could be helpful for studying diseases or brain conditions.

"If you think about the brain as a car, then what we have created is a car which has its engine on the roof and the gear box in the trunk," said Professor Juergen Knoblich, one of the researchers on the project.

He added: "You can study the car parts but you can't drive it."

The team say they don't think there are any ethical issues with their research so far, and that they don't plan to grow fully grown brains.