Arsenal cruise in to the Champions League group stages 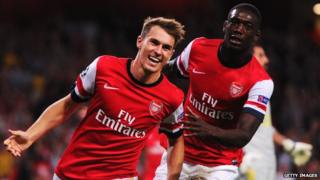 Arsenal cruised in to the group stages of the Champions League with a 5-0 aggregate win over Fenerbache.

Aaron Ramsey scored twice on the night as the hosts won the second leg of the tie 2-0.

It means the Gunners have now qualified for the group stages of the competition sixteen years in a row.

They have a 100% record in Champions League play-off ties, winning 12 games out of 12. The draw for the group stages takes place on Thursday.

It was not all good news for Arsene Wenger however.

Lukas Podolski has been ruled out for three weeks with a hamstring injury.

Meanwhile England midfielder Jack Wilshere also looked uncomfortable after receiving a late kick on the ankle but finished the game.