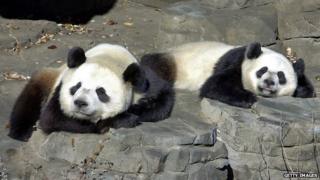 It's the big question that nobody knows the answer to: is Tian Tian the panda pregnant?

Staff at Edinburgh Zoo in Scotland are preparing for what could be the first panda cub to be born in Britain.

They still can't say for certain whether their female panda - on loan from China - is pregnant but say she is showing all the right signs.

If Tian Tian is carrying a cub, the birth is expected to be in the next two weeks - so the wait goes on.

One of the reasons why there is so much excitement around the potential pregnancy is that giant pandas are very rare.

Tian Tian and Yang Guang are the first to live in the UK for 17 years.

Panda cubs are born blind, hairless and unable to move, making them very dependent on their mums for the first few months.

After six to eight weeks, cubs open their eyes for the first time. They feed on their mother's milk for the first year and start eating bamboo at around six months.