Pocket money has gone up, according to survey 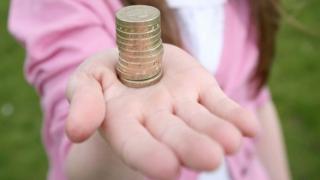 You're all getting more pocket money according to a survey by Halifax bank.

The company asked more than 1,200 children aged between 8 and 15 years old about their weekly allowances.

It suggested kids get an an average of £6.50 each week, which is a 52p rise since last year.

The research also suggests boys are getting more money than girls - the average for boys is £6.67 per week and for girls it is £6.32.

I get ten pounds a month but I think that's fair because my mum gets me expensive birthday and Christmas presents.

I think I get too much pocket money! I don't get any off my parents but both sets of Grandparents give me money, and so does one of my Aunts. I never spend it all, and when I do it's hardly anything.

I get £7 a week I think all kids shall have the same amount of pocket each week.

I don't get any pocket money because I think we should get things at birthdays and at Christmas.

I think if children want money to spend for themselves, they should get their own jobs, for instance a paper round or something like that. That also helps prepare them with slight work experience for their future lives. The fact that boys on average get more than girls seems unfair because we are just as good as them. I suppose that is always how it has been though, with women being paid less than men sometimes for working just as hard, but, that's life, because the world is not yet a completely fair place.

I get £5 per week but everyone else in my class gets more. I think kids should get more pocket money as things are getting more expensive.

I can't believe that the average pocket money is £6.50 a week. That is £350 pound a year. I think that this is much too high. I get £2 pound every week and I am happy with that. Children over the past 100 years are doing less work yet they are getting paid more, it doesn't make sense.

I get 5 euro pocket money from my Grandad every weekend. I think it's plenty and a lot of stuff is bought for kids on top of pocket money too like school supplies, clothes etc.

I get £1 a week apart from the holidays! And every time we turn a year older we get 50p more!

I'm 11 and I get 5 pound pocket money I thought that was enough but now hearing the average I would like some more.

I don't get any pocket money but I save up all of my birthday and Christmas money and put it in my bank to save up for the future which I think is fair!

My mum gives me £5 a week but I do a lot more chores than I used to when I didn't get an allowance. I also have £20 a month put into my bank account so I have a lot of money for when I'm older.

I get £5 a week for doing 5 jobs every day. I think that is fair as if I don't do one job, my parents take £1 and I still get the rest of my pocket money.

I have to earn my pocket money! for every job I do I get one pound. I do about 2 jobs on a Saturday and 1 on a Sunday.

I don't get pocket money except if I do a job like wash the car or cut the grass.

I get 10 pounds a month to match my age.

I don't get any pocket money, I'm 13 so earn my money from my paper round I do.

I think that I get more than enough pocket money. My allowance has got bigger and that is good but do I really need it when my mum and dad pay for sweets and new clothes when I need it?

No. I get little pocket money a month (1-2 pounds a month)

I don't get any pocket money but i don't really need any.

I don't have a weekly allowance so I think children should get more!

I get 5 pounds a week but I get another 4 pounds for doing my chores.

I get £2 a week I think an average of £6.50 is too much and if that is what children are given I think if they are naughty 20p should be taken of that week's pocket money.

I felt really sad when I heard this, because for the last 5 to 6 years i've done most of the chores in my house and have received no pocket money, not even a penny.

I don't get any pocket money but my mum and dad buy some stuff that I want as a substitute to that money. So if I have pocket money of 1 pound I would get something that costs 1 pound.

I have an allowance every month of ten pounds, but since about December I haven't had any. Sure we have birthday/Christmas money but kids should be able to spend their OWN money to prepare for the future. When I do save up some money I usually go to WHSmith to spend on pens and pencils plus pic'n'mix!!!