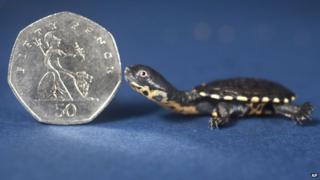 Two tiny turtles, among the rarest species in the world, have appeared in a tank at a sea life centre - to the surprise of keepers!

Staff at Birmingham Sea Life Centre had no idea one of their Roti Island snake-necked turtles had laid eggs.

Curator Graham Burrows said he believed the mother had hidden her eggs in the sand at the bottom of her tank.

"The first we knew of it was when we came in one morning and found these two youngsters swimming around," he said.

The one-week-old turtles are now receiving special care and are being fed a diet of bloodworm and shrimp before they go on display to the public next week.

The species is one of the rarest in the world and the surprise appearance of the two turtles brings the total captive population to just 250 worldwide. 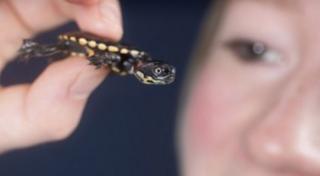