UN official has arrived in Syria to investigate chemical weapons 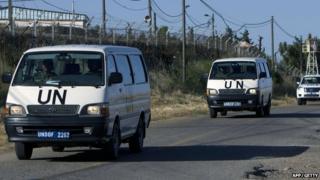 A top United Nations official has arrived in Syria to try to persuade the government to allow inspectors to investigate a suspected chemical weapons attack earlier this week.

UN inspectors are already in Syria - but so far, they've not been allowed to visit the area near the capital Damascus.

Hundreds of people are reported to have been killed in a suspected chemical weapons attack on Wednesday, just outside the Syrian capital Damascus.

The head of the UN - Ban Ki Moon - says if chemical weapons were used, it would be a crime against humanity.

Syrian President Bashar al-Assad has said he was not involved.

US President Barack Obama commented that reports of a chemical weapons attack in Syria represent a "big event of grave concern".

What is the UN?

It's extremely difficult to work out what's happened in Syria as both sides of the conflict blame each other for attacks.

Rebel fighters claim that the Syrian government carried out the attack, but the government denies this, saying it was the rebels themselves.

If it's confirmed that chemical weapons have been used, it may mean other countries decide to get involved in Syria's war.

Chemical weapons, such as poison gases, are banned under international law because of the harm they can cause to people over a wide area.

Find out why chemical weapons are so controversial.