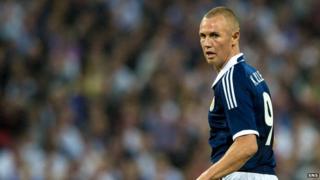 After 12 years playing for Scotland, striker Kenny Miller has announced his retirement from international football with immediate effect.

The 33-year-old will be remembered as one of Scotland's greats.

He hangs up his boots with an amazing 69 caps, and his goal against England in Scotland's 3 -2 defeat last week was his 18th in a dark blue jersey.

The Edinburgh-born goal machine is one the few players to have won SPL titles with both Rangers and Celtic.

He currently plays for Canadian side, the Vancouver Whitecaps.

Scotland boss Gordon Strachan said: "In my time as national coach it has been a pleasure to have a player with his ability and experience in the squad.

"He has come to this decision to help prolong his club career and feels that this is the best time bow out.

"We understand his decision and wish him all the best for the future."