Firefighters in the US are trying to control raging wildfires which have spread to the famous Yosemite National Park in California and now cover nearly 200 square miles.

Tourists visiting the area in its busiest season have been told to leave and homes nearby have been evacuated.

The fire's been burning for a week and has tripled in size in the last twenty-four hours.

A state of emergency has been declared around the area. 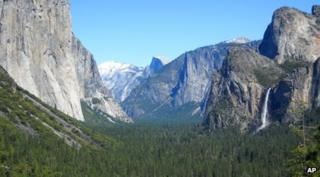 AP
Yosemite is famous for its natural beauty

The fires have not yet reached Yosemite and park officials say it's still open.

But the blaze has forced part of a motorway that leads to a park entrance, to shut.

In the state of Wyoming, wildfires have been burning near Yellowstone National Park.