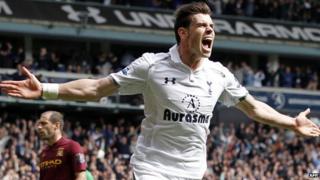 It's looking more and more likely that Tottenham will sell their star striker Gareth Bale to Real Madrid.

The transfer's not yet agreed, but it could happen over the next few days and would dwarf the £80m world record fee Real paid Manchester United for Cristiano Ronaldo in 2009.

The 24 year old Welshman is determined to join the Spanish club.

He has not travelled for Thursday's Europa League tie with Dinamo Tbilisi in Georgia because of a foot problem.

The injury kept him out of most of Tottenham's pre-season programme and their Premier League opener at Crystal Palace.