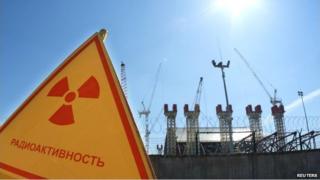 In 2011 an earthquake in Japan damaged a nuclear power plant causing it to leak radiation.

People living in the area had to leave their houses while workers tried to get everything under control.

Radiation is a way that energy or heat moves around. Low levels of radiation are everywhere - this is known as background radiation.

The Sun, soil, rocks and even animals all give off low levels of radiation.

A nuclear power plant produces a lot of radiation - but it is usually contained safely within the reactor.

But if the reactor becomes badly damaged - as happened in Fukushima in Japan in 2011 - radiation can escape and become dangerous to the environment.

Radiation damages the cells that make up the human body.

Low levels of radiation are not dangerous, but medium levels can lead to sickness, headaches, vomiting and a fever.

High levels can kill you by causing damage to your internal organs. It's difficult to treat high radiation exposure.

Exposure to radiation over a long time can cause cancer.

How dangerous is the Japanese nuclear power plant?

It's thought that only emergency workers at the plant are at risk of harmful doses of radiation, but it's likely they are only being exposed for short lengths of time so there's less danger.

The level of exposure for people living close to the plant was a lot lower, and there should be little risk to people living further away.