Ellie Goulding tops the chart for the first time 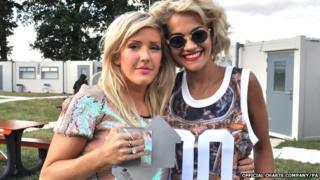 Pop songstress Ellie Goulding has topped the chart for the first time with her new song Burn.

Ellie said: "It was always my dream to have a UK number one single and it's been a long time coming!"

Lady Gaga also made an appearance in the chart. Her new song Applause reached number five.

Britain's Got Talent duo Richard and Adam Johnson stayed at the top of the album chart for a third week in a row with their album The Impossible Dream.