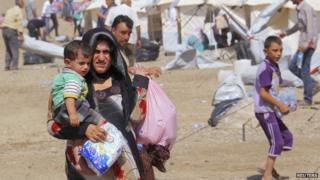 Aid agencies are apparently struggling to cope with the sheer number of arrivals.

There has been an increase in fighting in Syria and the refugees have been using a new bridge to escape.

Two million people are believed to have fled Syria in total since the uprising began two years ago.