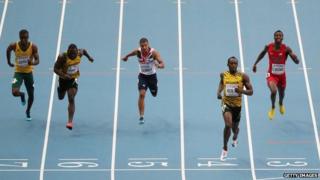 Usain Bolt continued his reign as the fastest man on Earth at the World Athletics Championships in Moscow last night.

The Jamaican stormed to victory in the 200m in 19.66 seconds, cruising over the line in trademark style.

There were bronze medals for Team GB's Tiffany Porter in the high hurdles, and the British women's 4x400 metre relay.