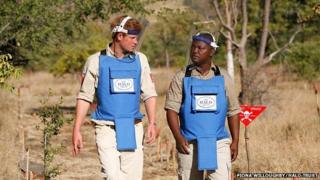 Prince Harry has been in the West African country of Angola to visit projects working to clear dangerous landmines.

He's taken on the work which was closely supported by his mother Princess Diana.

According to the head of the Halo Trust, the prince was "irritated" that some nations which provided mines are not helping the clearance effort.

In 2010 he met some of Halo's teams working in Mozambique.