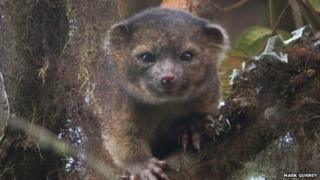 Scientists in the US have discovered a new animal living in the cloud forests of Colombia and Ecuador, South America.

It has been named olinguito and is the first new species of carnivore to be identified in the western hemisphere in 35 years.

Scientists say it's really rare to discover a new mammal these days.

The trail began when zoologist Kristofer Helgen uncovered some bones and animal skins in storage at a museum in Chicago.

"It stopped me in my tracks," he said, "the skins were a rich red colour and when I looked at the skulls I didn't recognise the anatomy." 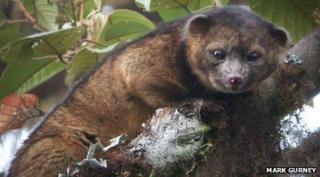 It was different to any similar animal I'd seen, and right away I thought it could be a species new to science," said Dr Helgen

Museums all over the world keep animal specimens for future records, and not all of them have been closely studied.

Many were collected more than a century ago and were often mislabelled or not properly identified.

But recent advances in technology mean scientists can extract DNA from even the oldest remains. 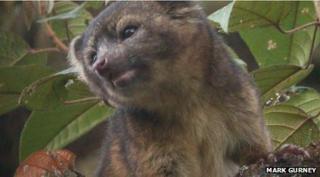 By comparing DNA samples with the other five known species, Dr Helgen was able to confirm the olinguito had not yet been identified.

But even after identifying the olinguito, a crucial question remained: could they be living in the wild?

"We used clues from the specimens about where they might have come from and to predict what kind of forest we might find them in - and we found it!"

The olinguito is now known to inhabit a number of protected areas from Central Colombia to western Ecuador.

The olinguito is a carnivore - the same as the group of mammals that includes cats, dogs and bears and their relatives.

Although it is a carnivore, it eats mainly fruit, comes out at night and lives by itself, producing just one baby at a time.

"It's hard for me to explain how excited I am," says Dr Helgen.

Dr Helgen has used such mammal collections to identify many other new species, including the world's biggest bat and the world's smallest bandicoot.

But he says the olinguito is his most important discovery.

Its scientific name is Bassaricyon neblina.

The last carnivore to be identified in the Americas was the Colombian Weasel.

Scientists have catalogued only a fraction of the planet's lifeforms.

New species of insects, parasitic worms, bacteria and viruses are discovered on a regular basis, but new mammals are rare.

"This reminds us that the world is not yet explored and the age of discovery is far from over," says Dr Helgen. "The olinguito makes us think - what else is out there?"