Dyslexia can be seen on kids' brain scans, say US researchers 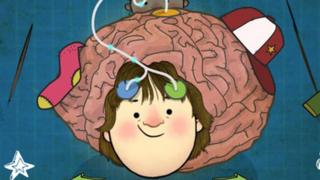 Scientists in America are claiming a big breakthrough: they say they can see signs of dyslexia in young children, using brain scans.

Researchers scanned the brains of a group of young children aged around 4 and 5 years old - and found differences in how parts of their brains work.

Around 1 in 10 people in the UK has dyslexia, which can affect the way a person sees, hears and understands words and letters. It's quite common, but nobody really knows what causes the condition.

On brain scans of adults that have dyslexia, there's an area of the brain that looks different to scans of those who aren't dyslexic.

This part of the brain - called the arcuate fasciculus - deals with word sounds and languages.

Researchers say they don't know whether dyslexia causes the change in the brain, or whether it is the other way round.

In the study, young children aged 4 and 5 years old had their brains scanned.

Researchers found that some of the children also had differences in this area of the brain - and these same children also scored lower on word tests.

The experts think this means the children may grow up to be diagnosed with dyslexia.

The team say the findings suggest that it is the differences in the brain that causes dyslexia, and not the other way around.

Though the team cannot prove this yet, they think this information can be used to help children who may be likely to have dyslexia from an early age.

There are many tools and teaching methods that can help people with dyslexia, such as coloured screens and computer programmes.

Have a go at our game which helps give you an idea of what it's like to be dyslexic.