Victory for England in thriller match against Scotland 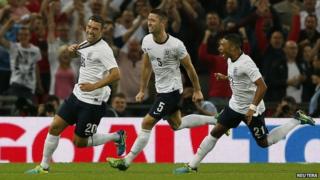 Southampton's Rickie Lambert has been hailed a goal hero today after his late header took England to victory.

But it came just twenty minutes from the final whistle and up to that point it was an edge-of-your-seat battle!

Scotland were one up just 11 minutes in, thanks to James Morrison, but Theo Walcott levelled at 29 minutes.

Early in the second half Scotland's Kenny Miller put one back, taking them into the lead again, before Lambert, on as a sub for Rooney, hit the winner.

Though all eyes - and much of England's hopes - were on superstar Wayne Rooney, it was his replacement that took the three lions to victory.

Lambert, in his very first match for England, came on as Rooney's substitute and minutes later he'd taken the score to 3-2, where it finished up at the final whistle.