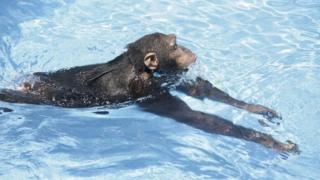 They may be no match for Olympian Michael Phelps, but a chimp and orangutan have proved to scientists that apes can swim just like us!

The two captive animals were separately filmed ploughing through water using a form of breaststroke although most land mammals swim using doggy-paddle.

Scientists believe the peculiar swimming style of humans and apes might be the result of life in the trees.

Great apes are not known for their swimming ability, and there have been cases of them drowning in zoos that use water moats to confine them.

The chimpanzee, called Cooper, showed off his skills in a swimming pool in Missouri.

Not only could he swim, but he enjoyed diving to the bottom of the six-foot deep pool to pick up objects.

"It was very surprising behaviour for an animal that is thought to be very afraid of water," said researcher Renato Bender, from the University of the Witwatersrand, South Africa.

The orangutan, named Suryia, was filmed at a private zoo in South Carolina swimming freely over a distance of 12 metres.

Both animals used a leg movement similar to the breaststroke "frog kick", according to a report in the American Journal of Physical Anthropology.