Fantastic ferret rescue from the sea by RNLI lifeboat 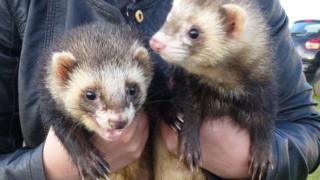 Two young ferrets have had a lucky escape after being rescued from the sea by lifeboat volunteers in Northumberland.

Tootsie and Lucky were stuck on rocks in Cambois Bay and their owners could not rescue them.

Lifeboat volunteers went to save the pair after their owners put in a 999 call to the Humber coastguard.

An RNLI lifeboat spokesman said the animals were "minutes away from drowning by the rapidly rising tide".

It was "definitely a first" for the 162-year-old station and "probably the first ferret rescue in lifeboat history", operations manager Pauline Cooksey said.