The lawn mower with a difference at Chicago O'Hare airport 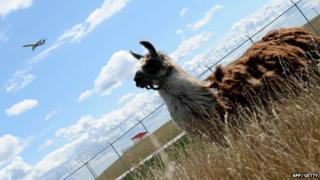 The rocky and hilly areas around the runways were tough to mow and was damaging the city's expensive equipment.

But apart from trimming the grass they have another important function - keeping wildlife, like birds, from interfering with flights.

Long grass isn't just messy, airport officials explained as they unveiled the new crew, It's also a breeding ground for the small rodents that attract hawks and other birds of prey.