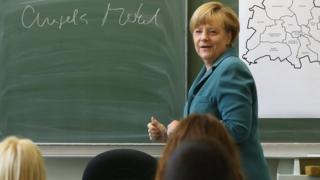 Pupils in Germany got a lesson from a very important person this week.

German Chancellor Angela Merkel - who's as important as the UK's prime minister - turned up at a high school in Berlin to give a history class.

She wanted to teach the students about the building of the Berlin Wall 52 years ago in 1961.

Germany used to be two countries. It was divided after the second world war into East and West Germany.

Part of the city of Berlin belonged to the east and the other to the west.

Life in East Germany was very different to West Germany. The type of government was different. People in the East didn't have as much freedom and had to live under strict rules. 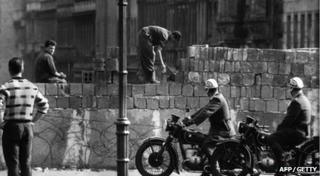 This is a picture of the Berlin Wall being built

The Berlin wall was built to stop people travelling between East and West Berlin and armed guards kept a close eye on it.

Lots of families were divided and many East Germans wanted to leave for the west where they thought they would have a better life.

The wall was made of concrete and was 96 miles long.

More than 100 people were thought to have been killed over the years trying to get past it. 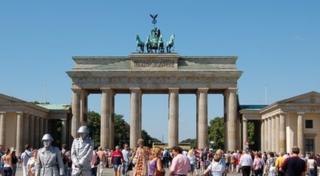 The Brandenburg Gate stood between East and West Germany

On 9 November 1989 the East German government said people from the east could now cross into the west.

Around two million people flocked to the wall to celebrate and that weekend many of them took pick-axes to knock bits of the wall down.

A year later East and West Germany joined together to become the single country that is now Germany.

On the anniversary Angela Merkel said: "Without freedom, there is no democracy, no diversity, no tolerance, no united Europe."