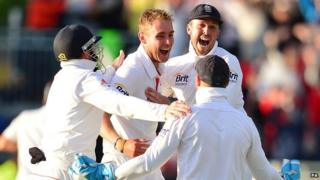 England's players are having a well earned day off after wrapping up the Ashes series late last night.

England won the ashes out right after a dramatic victory over Australia in Durham.

But man of the match, bowler Stuart Broad, finished with 11 wickets, as England bowled the tourists out for 224, making it three nil in the best of five series.