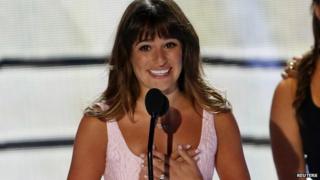 Lea Michele has dedicated her Teen Choice Award to her boyfriend and Glee co-star Cory Monteith.

In her acceptance speech for the Choice TV actress comedy award, she said: "I promise that with your love we're going to get through this together."

Monteith, who co-hosted the Teen Choice Awards in 2010, was found dead in July in a hotel room in Vancouver.

The event in California was Lea Michele's first public appearance since her actor boyfriend passed away.

Michele, who was Monteith's girlfriend both on and off-screen, said the show's fans were "most certainly the greatest fans in the world" after their support in the past few weeks.

Guide: What to do if the news upsets you