Miley Cyrus gets first UK number one with We Can't Stop 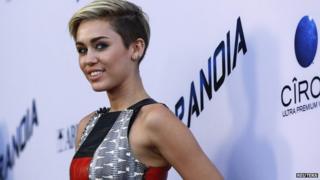 American pop star Miley Cyrus has topped the singles chart with We Can't Stop - the first time one of her songs has ever hit number one in the UK.

The pop princess, who found fame as the child star of Disney children's show Hannah Montana, knocked Swedish DJ Avicii's Wake Me Up down to number two.

The last time Miley peaked in the UK singles chart was at number three with See You Again in 2008 and at 11 in 2009 with The Climb and Party In The USA.